Freud introduced the idea of condensation in his Interpretation of Dreams. Dreams, he found, condensed many aspects of the dreamer's experience into a single image.

An image from a dream of one of my patients is a good example. The dream consisted of a single image. The image was of the Mormon Temple in Los Angeles, California. 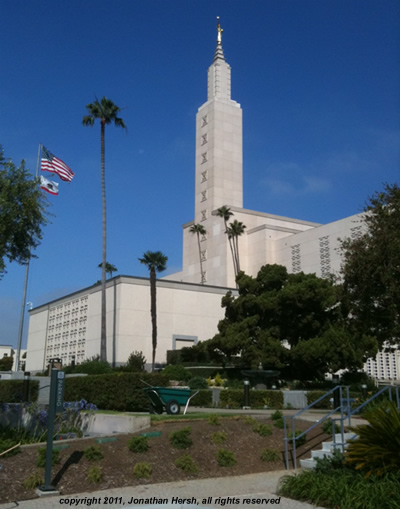 The temple is a very large building consisting of a one or two story flat structure with a very high tower rising from the middle – at least this is how the patient remembered it. On the right side of the tower, about half way up, was a gang insignia in blue paint, like the graffiti that appeared around L.A. at the time.

In reality (and in the dream), at the top of the tower is a large gold (plated?) statue of the angel Moroni blowing his horn (thanks to Jill Bleak Locke for giving me the correct name). The Temple is on a large grassy hill, and the hill is surrounded by a gate. It is in the middle of Los Angeles, and the dreamer had recently passed the building and thought of how valuable the land must be. He also was impressed by the fact that no one but Mormons are allowed inside. The day before the dream he had also been thinking about an aspect of his work that related to trumpets. He was a salesman and a big sale was possible that related to trumpets.

Further, the patient, at the time of the dream, was in a sexual draught. His girl-friend had gone on a long trip, and, in spite of himself, he was angry at her. He was in a conflict about how to handle his sexual urges, whether he should control them and be faithful to his girl-friend, or to make some tentative moves in the direction of meeting another woman.

It is not hard to see that the dream motif combines and condenses all of the things I mentioned that were going on with the patient and probably other things as well. The building with its tower on a grassy hill is about as clear a reference to an erect penis as one could imagine. The concern about money and the freedom and power it brings is evident in the monetary value of the Temple property as well as the connection of Moroni's trumpet to his sale. The secrecy of the Temple hints at the secrecy of his growing sexual fantasies. And there is probably a religious reference as well, though, at the time, we did not explore this. The gang mark reminded the dreamer of a tattoo, and tattoos were, I believe, used in adolescent initiation ceremonies to mark the transition of a boy into a man. There is also a hint here of a homosexual motif, however, homosexuality, in some native cultures was a temporary phase during which a boy was pulled away from his mother into male society as a preparation for adult responsibilities and marriage. Apparently the dreamer is finding himself, apart from his wife.

There are many psychologists who have no interest in dreams. They see them as mere fantasies or random firings of the brain or fragmented remnants of the previous days experiences. But, for those who think dreams are worth considering, Condensation is a simple fact. But besides being a fact, it is rather remarkable. How can the mind be creative enough to produce an image that contains all these references? Most people couldn't do it on purpose and consciously if they tried. There must be something in us that can, and it is unconscious.

It seems to me that Condensation comes out of the nature of experience itself. I think every experience has many factors “packed” into it. In another words, it is not just dream images that show condensation, but every experience does. And it is the fact that all experiences are highly condensed that allow dream images to be condensed. Every experience we have is packed full of meaning and feeling and thoughts and associations. Often there are multiple meanings and multiple feelings and so on. In a new environment, with new objects we have new experiences, and it is here we can see, by comparison, just how packed our usual experiences are. It is only by reflective analysis that individual parts of experiences can be “dissected” out and examined individually.

There is 3D film out now by Werner Herzog called Cave of Forgotten Dreams. It is a documentary on a cave that was discovered in 1994 that contains some of the oldest rock paintings found to date. A team of archaeologists, artists, and so on are studying the cave and its contents full time. Without the knowledge they have contributed we wouldn't know anything about the paintings except that they are animals. We wouldn't even know their age. Even with the added knowledge, we know very little about it all. Who painted the paintings and why? What were the conditions inside and outside the cave? How did they paint the paintings? What did they do with them? Did they play music, dance, pray? Was it a few individuals who snuck into the cave to paint, or was it a collective phenomenon? How did they get such good representations of the animals without the animals being in the cave? And it seems there are a million other unanswered questions. The film-maker is trying hard to fill in all the blanks. Throughout the film he adds more and more information about the animal remains found in the cave, the smell of the cave, the tools found in the cave, the climate of 32,000 years ago, and so on. It is only at the very end of the film, after he has built up this web of meaning and associations and thoughts, that he shows the paintings without comment. They have become pregnant with meaning and feeling. The film-maker packed more and more into the images he is filming. He is using the ability of the mind to Condense.

Another example is the basic psychological fact that we can have many and contradictory feelings towards something all at once. You can hate someone and love them, despise and admire them, feel like obeying them and feel like resisting, look down on them and look up to them, envy them and feel superior to them, feel angry at them and sorry for them, want to yell at them and feel like crying about them — all at the same time. This makes it so it is often difficult to know what you are feeling and more difficult to understand what another person is feeling.