I want to present some scientific findings made during my activities as an organic vegetable gardener in Los Angeles.

While working in a vegetable garden, one's hands almost always get dirty. This is especially true if the soil is moist. Then they become muddy. This mud, which sticks to the hands, dries out over time and, when it is rubbed off, there is left the condition called "dirty hands".

It is a well-known custom in certain areas of the U.S. for dirt to be washed from the hands, using water and often soap, and especially before eating. Many parents even consider it an important duty to patrol their children and make sure that no soil adheres to their hands at any time.

If the reason for this caution is social, aesthetic or religious, I can only say "to each his own." However, if the reason is to insure the health of the youngster, then I feel obligated to put forward the following scientific observations. 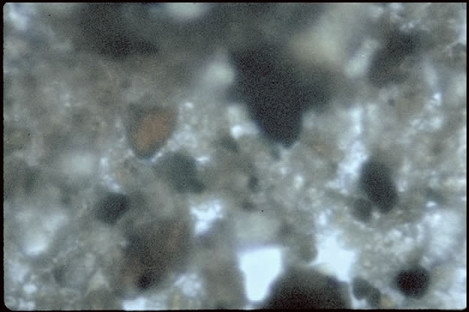 A Matrix of Grains of Sand from a Los Angeles beach, held together by what appears to be a sticky substance. (All photos shot by myself through a microscope at between 60X and 1000X — but I can't remember which is which.) 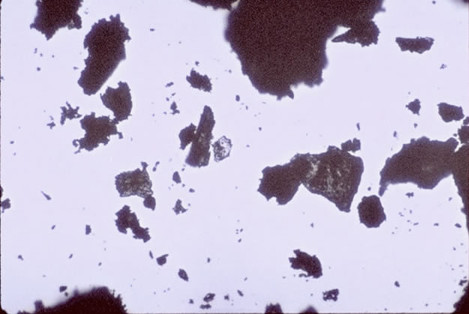 Grains of Sand from a Los Angeles Beach 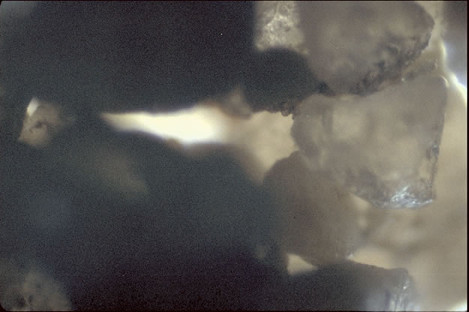 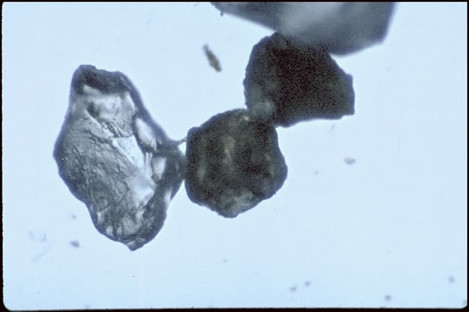 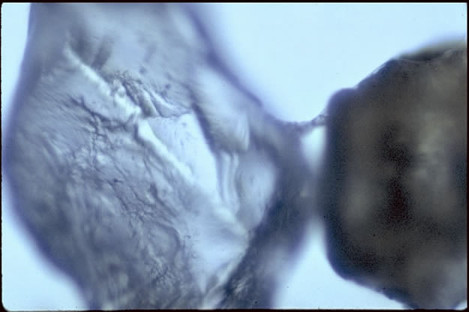 Closer view of the above grouping

If one looks through a 60X microscope at the dirty hand, one is struck immediately by the fact that the "dirt" is not a solid sheet, but rather consists of thousands of tiny specks of feldspar, quartz, magnetic lodestone or whatever else the soil in your particular area consists of. The history of how larger rocks got ground down into these tiny grains is documented by geologists and minerologists, but what we know by observation is that many of these particles come to stick to the hand of a person who works in the garden, much as they stick to the roots of the vegetables themselves. 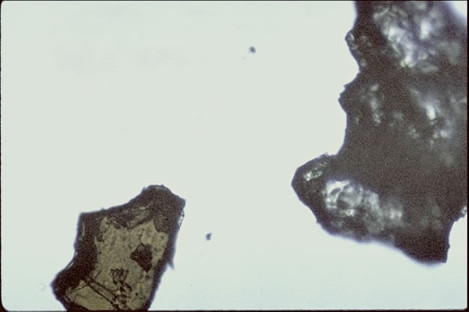 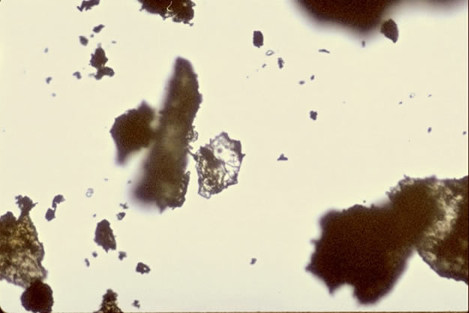 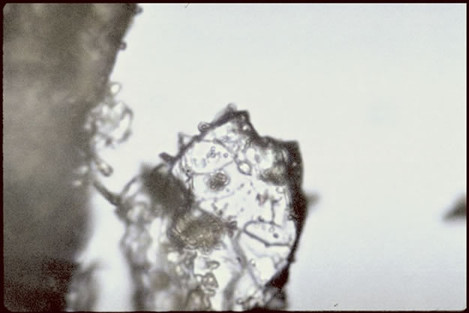 A Closer View of the above image and of the Link between the Root Hair and the Grain of Quartz(?)

Now, it is equally obvious to observation that the hand is not a homogeneous, perfectly smooth surface. There are many large cracks in the palm and fingers, visible even to the eye, and there are innumerable tiny and orderly indentations that are visible with an 8X magnifying lens. On the fingers these lines are the fingerprints.

Now, it is into just these canyons that the tiny stones of quartz, lodestone, and feldspar become wedged. After all other particles have been rubbed or washed off, these remain. And it is because of these minerals that it is extremely hard to clean the hands completely once they have become dirty.

Now what, in fact, becomes of the thousands of extremely small micro-specks of minerals that escape being washed or scraped off the hands? To understand this, one more observation must be described. Under the 60X microscope, the skin surface of the palm, even on the high points, is not perfectly smooth like cement, but looks more like the scales of a fish. Under the tiny flakes of skin is more skin, which is a cover for red, rushing, liquid blood. It is just around these flakes of skin that the earth particles gather and remain.

Now it appears to me, under my hand-held microscope, that the minuscule earth particles actually wedge under the flakes and, therefore, enter the body.

At the very least, through the phenomenon of "dirty" hands, the earth comes into intimate contact with our blood. So close do these two substances come that earth passes directly into the blood in the same manner that it enters the roots of the vegetables we later eat. 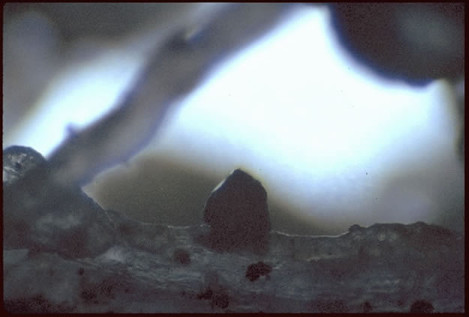 Tiny Grains of Sand (black) embedded in a Root Hair (the long, vertical, clear object along the bottom) 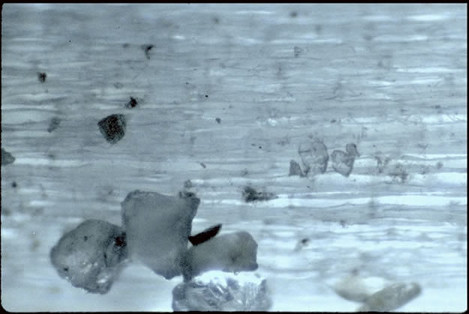 Here the Root Hair is on the top and the Grains of Sand (Quartz, etc.) are embedded in it but are seen upside down. Some Grains are embedded, and others seem to be adhering to it. 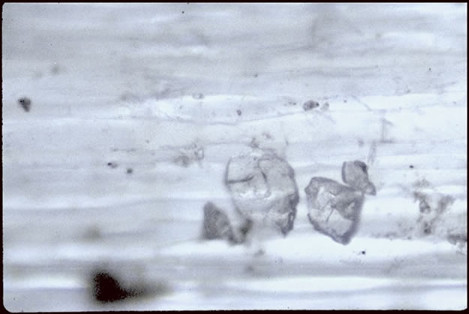 Whether or not this is true, however, I cannot tell for sure with my simple 60X microscope, and I would appreciate the observations of other scientists for validation or invalidation.

If, however, my observations are true, the following question must be asked again with all seriousness: Is it or is it not dangerous for the earth to enter us directly, and not just indirectly through the foods we eat?

Let us assume, for the purpose of this paper, that the earth in question is good, clean, normal, natural, non-polluted soil, consisting of particles of matter that have been here in some form since the earth cooled, and which also, in some form, helps make up our bodies.

Theory: Our bodies were made [so to speak] to get our hands and feet "dirty". By nature, we walk on the soil, touch it with our hands.

Or to put it another way: by absorbing earth, we become earthy. Shoeless Indians look more solid than people who work in high rise office buildings, drive home on freeways, walk on paths to their houses, and never during an entire day set even shod feet on unpaved ground. And if they should go out and get "soiled" by contacting the earth, they immediately wash as much off as they can, as quickly as possible.

Speaking psychologically, this absolute hatred and fear of earth (which perhaps underlies the building of the pyramids) is a phobia and, if the above theory is correct, it is physically as well as psychologically dangerous.

Fortunately, even if the theory is correct, the solution is simple and pleasant. It is necessary only to work in the garden as much as possible and let the earth cling to the body a little longer than is customary. The earth is below us, but this does not mean we are superior to it. It is just as much us as the water we drink and the air we breathe.

Further research might show whether or not, through the condition of "dirty" hands, earth does merge with blood, and whether or not earth people are more solid and healthy than air people.

Unfortunately, the scientific research necessary to answer these questions is both difficult and expensive and is beyond the scope of the author's endeavors.

Thoughts on the paper, 28 years later

Thoughts on this paper, 28 years later

The ideas expressed in this paper are highly theoretical, but they still interest me. I have a series of photos I made through a microscope that I am able to include in this on-line article (above and below). For the experiment, I put radish seeds in a cup with water and beach sand and let them sprout. After the root hairs began to appear I looked at them under a microscope. As I remember it the power varied from about 60X to 1000X.

What I saw, or thought I saw, was the hairs adhering to the little specks of mineral. It even appeared that the hairs merged with the specks and, as it were, “digested” them. It struck me that they may emit some acid that “melts” down the mineral and then, somehow, absorbs them or, better, merges with them. The images above and below may suggest other interpretations to the thoughtful reader.

The following is a series of images related to the process as I imagine it. In this first picture we see, what looks to me to be a grain of quartz in intimate proximity to a fine root hair of a radish or, probably more accurately, the hair on a root hair (out of focus). 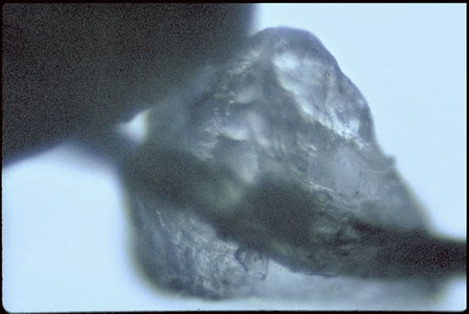 In the following image we have, as I remember it, the tip of the hair of a root hair. It appears to me very quartz like. 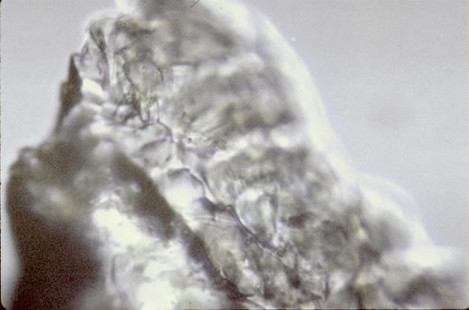 The following four images are of the same root hair (or hair of a hair). In each one, a different area is in focus. All appear to me to show the hair as "mineral-like," in my imagination just after it "ate" and "digested" or merged with a grain of quartz. 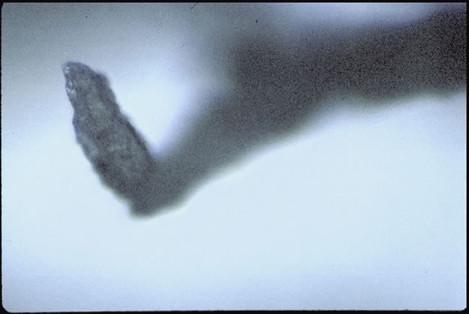 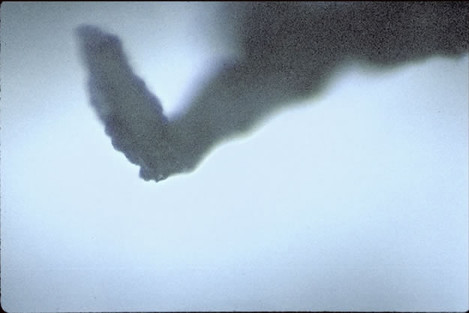 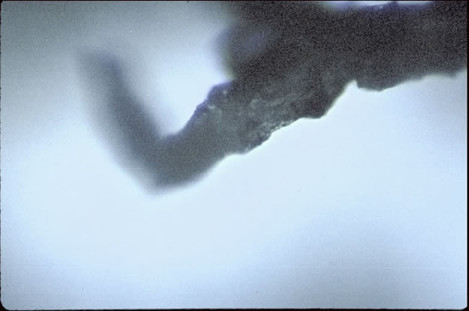 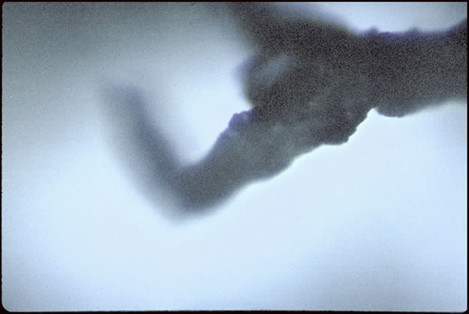