Original Essays on the Psychology of Anger and/or Violence

We thank all those who have submitted an essay to the JMH International Prize Essay Contest. As of now, February 1, 2017, we have decided not to continue with the contest.

For those who feel they have an important contribution to the subject of the Psychology of Anger and/or Violence, please feel free to submit your essay with the form provided here. If the judges agree that the essay is a significant contribution, we will publish it here (subject to agreement with the author).

Two Opposite Perspectives on Negative Feelings and Negative Emotions

One view of our Negative Feelings and Negative Emotions that is current in psychology is found in many of the classes psychologist take for what we call our “Continuing Education.” It can be stated as follows:

1) We all have negative feelings; it is human nature to have them. However, feelings such as Anger and Depression are bad for our health. We can be angry at someone and blame them for our problems, and this is natural, but we aren’t hurting them by being angry; we are hurting ourselves. So, no matter how angry you are, it is good FOR YOU to Forgive and to Understand. And the same goes for Depression and Anxiety and Envy and all the other painful, negative feelings and emotions. They are all natural, and we shouldn’t blame ourselves for having them, and we shouldn’t pretend we don’t have them or run from them — we should be Mindful of them (to use a word that is currently quite popular in the field) — but they do cause illnesses and suffering for us. So it is good to choose to forgive, to understand, and to accept our situations.

The opposite view is:

2) We all have negative feelings; it is human nature; and it is not good to run from them or pretend we don’t have them. It is possible that these feelings are bad for our health (though they may not be; they may even be necessary for our health), but, even if they are, there is nothing we can do about them. We can’t forgive and forget and understand just by willing it, even if we want to. We can’t accept our situation and our fate just by telling ourselves this would be better for our health. Negative feelings are part of our human nature, and that’s that. We just have to learn to live with them, and we can make ourselves sick trying to get rid of them, because then we are trying to do the impossible. If psychologists want to preach to their patients to get rid of their anger and depression and anxiety, they might as well send them to church and to receive a sermon about how they need to forgive and forget.

Metaphorically, the first view sees negative feelings and emotions as little fenced off areas in a vast universe. We stumble into one of these little areas from time to time, and we can, if we aren’t careful, sit down and stay in one of them, but, once we see things from the larger perspective, we can get up and get out of the little “state” we are in and move out of it and into the bigger world. We can "step out of" an angry state, for example, and step into one of forgiveness and understanding. In these states of cheerfulness we will join all the people who are living in the bigger, real world, and we can get on with our lives. The little areas or pockets of misery and suffering are tiny states in the overall nations and worlds and vast universe of our souls.

Using the same metaphor, the second view sees us all living in a vast universe of anger and anxiety and depression. There is no getting outside it; there is no other universe. We can try and we can pretend we have made it out or that we are on a road that will get us out, but this is nonsense. We are in it, and we might as well get used to the idea. What we can do, once we settle down, is begin to look around and get our bearings. We will begin to notice that there are different areas within this universe: There are realms of angry thoughts, worlds of angry feelings in our bodies, continents of angry expectations. We can begin to enter these and look around us and evaluate and re-examine what we discover — if and when we have the time and inclination to do so. It is possible that this objective work on ourselves will lead to whole areas of new feelings and thoughts, but if we begin to feel some forgiveness or begin to understand those we are angry at or if we begin to forget and get absorbed in some pleasant enterprise, this is not to suddenly step out of the negative universe into a new one. Forgiveness, understanding, accepting, and so on, are states within the negative universe, not states outside it. Suffering is the earth of Life and, within this soil, many beautiful plants can grow, but they all grow from this soil.

As one of the basic Psychological Laws I include a Law of Perspectives. This states that there are two Global Perspectives on Life, and these correspond to the two above views. In a way these are like the two ways of looking at the famous picture of the rabbit-duck. 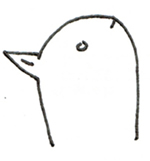 It is also similar to how artists can start their paintings on a dark or on a light canvas. It is as if the mind is an artist that paints its view of the world on either a dark or light background. One type of person sees even the most cheerful moment against a dark background, whereas the other type sees the bleakest moment as a dark spot on a rosy background.

Psychologists in the first camp will accuse their colleagues in the other camp of loving to wallow in suffering and of dragging their patients into bottomless pits.

And those in the second camp will feel their colleagues in the first camp are superficial and naive and lying to themselves and to their patients and causing damage by encouraging them to turn against their own feelings and their own intuitions of what is real and true and of making them feel guilty and anxious for not being capable of being cheerful the way everyone else is (which isn’t true anyway). It’s a case of the emperor’s new clothes with the psychologists of the first camp being the loyal followers of some emperor.

On the other hand, it is possible there is a third perspective that is seen by neither camp. I believe that there is and that it is not a simple composite of both perspectives. Rather it is one that grows organically out of one or the other or both.

2 Views of the Brain and Body

These two views correspond to two views of the brain and body. The first is that anger, depression, anxiety, envy, and all other negative emotions are “located” in a distinct and relatively small area of the brain (or in distinct and relatively small areas of the brain). Alternatively, they are controlled by certain specific chemicals or specific areas on specific genes. It should be only a matter of time, these scientists will think, before we learn to fix the bad DNA, control the level of the bad chemicals, or modify the defective areas of the brain so that the overall organism can function as it should in accord with the evolutionary goal of successfully adapting to the environment.

The second view does not see bad feelings and emotions as centered anywhere in the brain or even in the body. It is not a bad brain or body that creates suffering but the reaction of a healthy brain and body to the impossibly difficult universe in which we all live. We can fiddle all we want with this or that part of the brain or with this or that neurotransmitter or gene, but, if successful, all we do is create creatures who are more and more incapable of having feelings that mirror what is going on around them and in them. Soon medicated and genetically engineered people will not care if the world blows up around them and won't care if they or those near them live or die. Brain and genetic research has its place, but we should proceed very very carefully, if we can.

Probably most of us can shift back and forth between the two views if we want to.

the One   the Whole

focusing   on the self

learning about     the world

feelings of success,     of the good life

Search this site for