Longer observation (16): The Growth of Trees and of People: If you look casually at a large tree that has lost its leaves for the Winter, you might be struck by an intriguing and/or beautiful pattern, but the pattern itself will probably appear meaningless and random. A grove of trees or a forest can feel even more overwhelming and confusing and meaningless to an intellect trying to understand it. However, if you begin to think about the tree (or trees) from the angle of their history, the patterns begin to make sense. 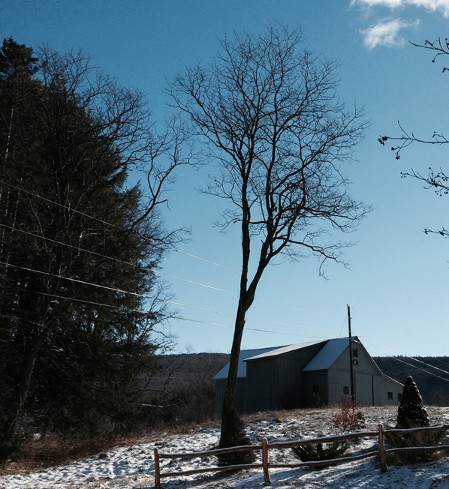 There are at least two factors that contribute to the growth of a tree. First is an inherited pattern that exhibits itself more or less like a fractal. A pine tree, for example, has a simple pattern that appears something like this:

Other trees grow along different principles and exhibit different patterns, but these patterns repeat themselves on smaller and smaller levels beginning with the trunk and ending with the twigs and leaves.

The second factor influencing tree growth is the needs of the tree and the environment in which it is growing. The tree needs support from the ground for its growth, so if it is growing on flat ground, that is one thing, and if it is growing on the side of a hill, that is another. The type of soil is also a factor. Other obvious things that influence the growth of a tree is its need for sun and its need for water. Trees don't just grow according to the innate pattern programmed by their genes; their roots seek water, and their branches seek light, and so on. How they grow depends, in part, on how it can get its needs met.

If you look at a tree from this angle, it is often possible to make sense of some of the pattern of growth. First there is the innate pattern, and second there is what the problems the tree ran in to in growing up. To take a simple example. If the tree is in an area shaded from the afternoon sun, we will see more growth on the side of the tree facing the morning sun: There will be more and bigger branches on that side, and the whole tree might lean in that direction. Then there is the need for the tree not to fall over, so if there is a large weight of branches growing on one side, likely there will be one or more large (perhaps leafless, perhaps dead) branches on the other side whose function is balance not, to get light. If one of these balancing branches should break off, maybe because of a lightening strike, we might see new growth coming around the break point. 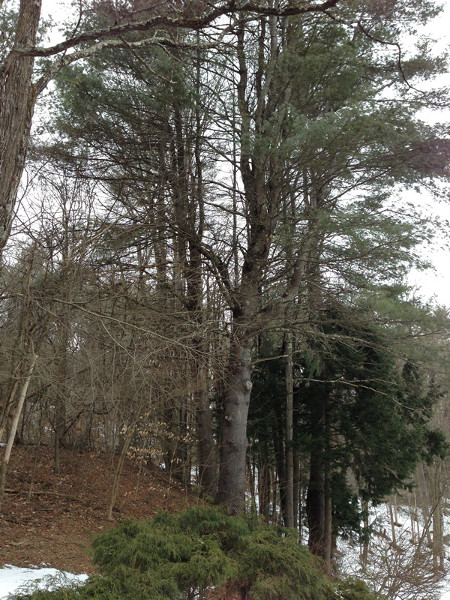 The Search for Balance and Light

This same approach can help us understand the seemingly random pattern of a grove or forest of trees. For example, it is often easy to see how trees compete with each other for space for their leaves to get light. They wind up sending branches in unusual direction to get the space available, or they grow into other trees, even to the point of killing them. 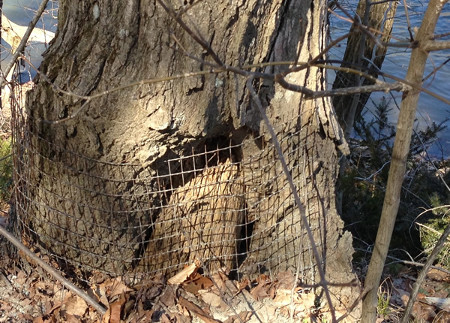 Did humans protect the tree, when it was young, from a beaver?

And trees, to survive, may have to adapt to humans: 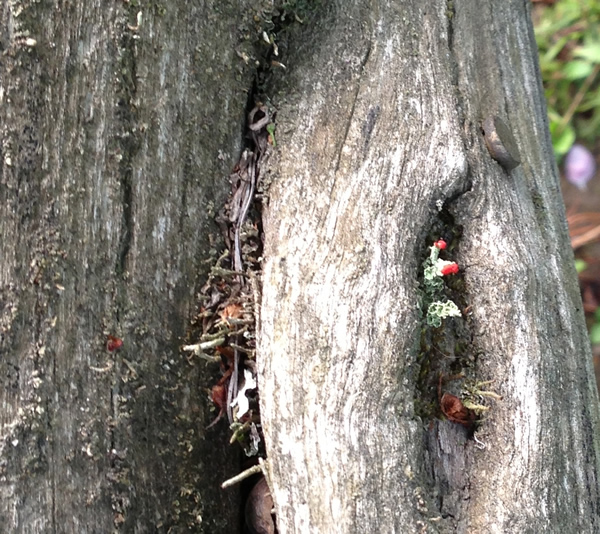 This tree adapted to a spike. 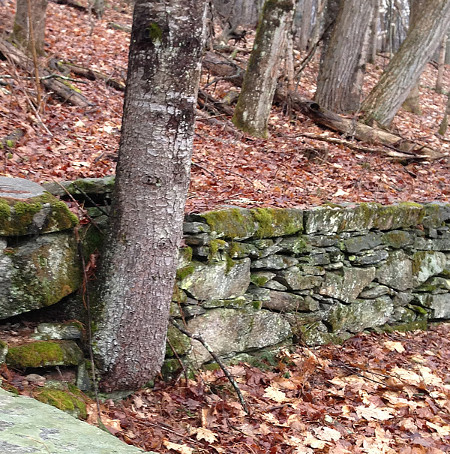 This tree and the wall have worked out a compromise — so far!

All of this is by way of introduction for my main point which is that trees wear their growth history on them. If it a tree is ten years old or fifty or five hundred years old it is possible to see how it started and the problems it had growing up and how it reacted to and compensated for the problems. Understanding trees in this way can be quite fascinating if you begin to look at it this way.

It seems to me that the reason trees wear their whole history in the present moment is that a tree, as a whole unit, is immobile. If it needs more water, it can't move its whole self over to the water. It stays where it is and grows a root over to the water. If it needs sun, it doesn't move itself out into the sunlight to sun itself. It grows a branch out in the direction of the sun. If the branch breaks off at some point in its history, it still leaves a mark on the trunk, and we can often figure out what happens. A tree wears its history on its present self.

Animals are different. If an animal needs water or nutrients or warmth it moves itself over to the area where these are present. It doesn't need to change the structure of its body; it just moves its body. This seems like a huge advance and advantage over the trees, at least in terms of speed of adapting problems. It also means that there is no way we can read its history (of problems and successes) from its body or, at least, not to the same extent as trees. And we humans are more like animals in this respect. Some of what we have been through is visible in our body through scars and effects of illnesses and missing parts and so on, but, on the whole, you can look at a person all day and not be able to read how it got its needs met ten or twenty or thirty years ago. This doesn't mean the person didn't have needs and didn't run into problems and didn't respond to them. It just means that we can read this history from looking at them, and, if we want to get it, we need other means.

And it is worse with a psychological history. No doubt people have needs for love and recognition and respect and so on. No doubt, people become "twisted" trying to get them in unfriendly and unforgiving environments. No doubt people become inwardly "unbalanced" and "compensate" in all sorts of ways to make themselves feel better and to keep them selves "together" and from "falling apart." They tell themselves and come to believe all sorts of things. They "pump themselves up" when they feel "down." They "seek the light" when they feel "in the dark." But only the vaguest hints of such dramas are visible on the face and body. This is one of the ways we are different from trees.